Monty Python’s Spamalot in Manila
by: Manila For Kids

MONTY PYTHON'S SPAMALOT - The Tony Award-Winning Musical Premieres in Manila! If you grew up in Europe/USA and you are above 40, you probably have seen at least one Monty Python TV show or movie. Were they popular in the Philippines as well? A quick check with my local friends confirmed that they were not too familiar with this famous British comedy group. 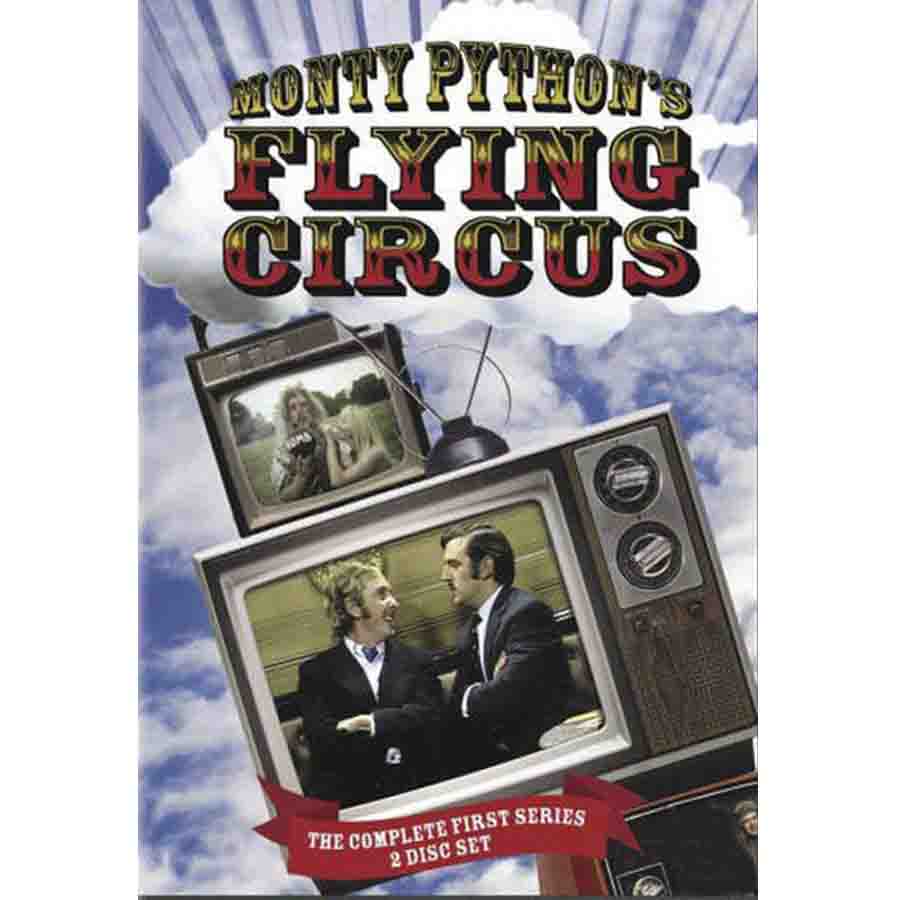 So, let me introduce them quickly to you! Monty Python's members Graham Chapman, John Cleese, Terry Gilliam, Eric Idle, Terry Jones, and Michael Palin created their Monty Python's Flying Circus sketch comedy show in 1969 which was aired on BBC TV. They wrote all sketches themselves, had full creative control, and it was nothing that anyone had ever seen before. Punchlines did not exist, a sketch would suddenly end, animations were mixed up in the scenes. Absurd, surreal, bizarre and unexpected are words that come to mind. The series were a huge hit. The group also ventured into films like Holy Grail (1975), Life of Brian (1979) and The Meaning of Life (1983) which also became popular in the USA. Monty Python's influence in comedy have been compared to The Beatles influence in music. My husband loves Monty Python's bizarre humor and can't wait to introduce them to our kids. He is so happy to know that MONTY PYTHON’S SPAMALOT is coming to Manila! 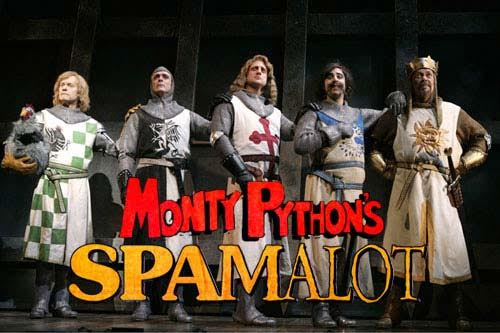 Having left audiences “weak with laughter” (The Independent UK) everywhere from Australia to Hungary, Serbia to Norway, Japan, Ireland, and all over the United States and the United Kingdom, MONTY PYTHON’S SPAMALOT is finally coming to the Philippines this July! This smash hit musical, which the New York Times calls “resplendently silly,” has received numerous accolades, including The Drama Desk Award for Outstanding Musical, the Grammy Award for Best Musical Show Album, and the highly coveted Tony Award for Best Musical. 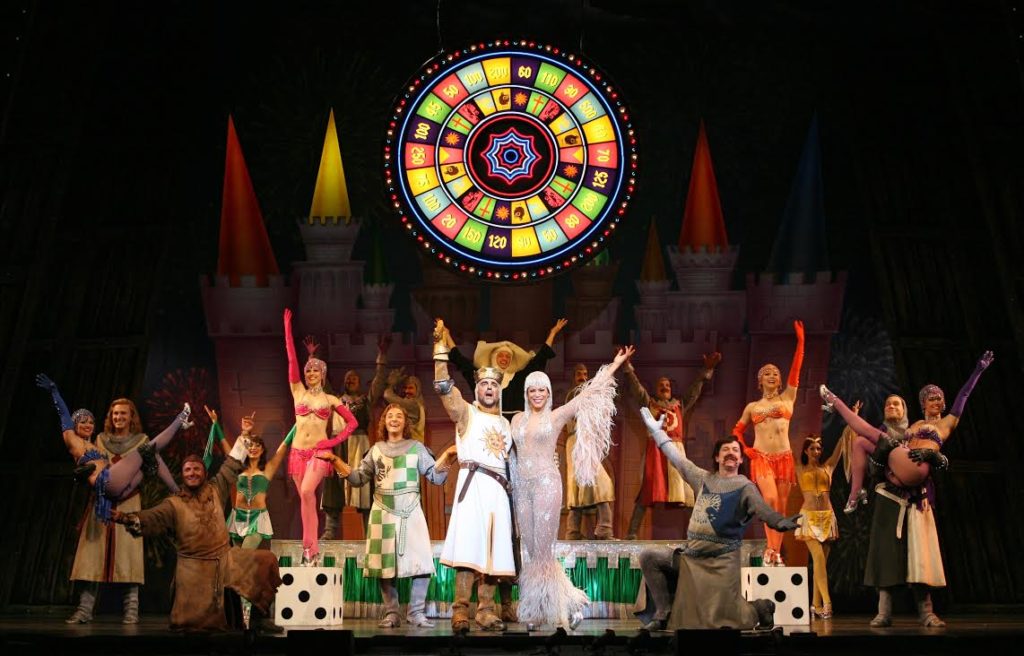 The Story This “laff-a-minute show” (Theatermania) is a musical comedy based on the 1975 film MONTY PYTHON AND THE HOLY GRAIL, one of the funniest comedies of all time.  Starring award-winning singer-actor Rachel Alejandro, theater diva Carla Guevara-Laforteza, and stage veteran Lorenz Martinez, among many others, MONTY PYTHON’S SPAMALOT tells a crazy version of the story of King Arthur, the Knights of the Round Table, and their quest for the Holy Grail. Cast members are (in alphabetical order): Roxy Aldiosa, Rachel Alejandro, Reb Atadero, Rachel Coates, Domi Espejo, Carla Guevara-Laforteza, Lorenz Martinez, Noel Rayos, Bibo Reyes, Dean Rosen, George Schulze, Edrei Tan, and Chino Veguillas. Directed by Joel Trinidad and Nicky Trivino. Musical Direction by Onyl Torres. 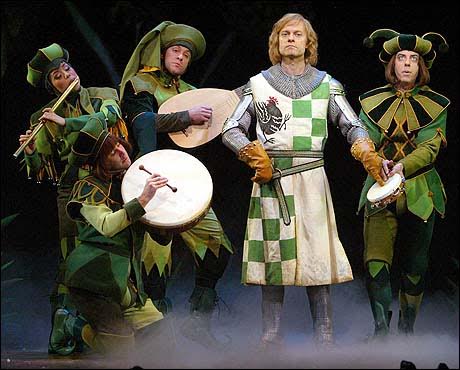 I know a few parents, especially the dads, who can't wait to pass on their love for Monty Python to their children. Take them! Introduce British absurd humor to your kids and let them roll with laughter. Just leave the very little ones at home. They wouldn't get it. The show is recommended for ages 10 and up and Ticketworld advises parental guidance for under 13. Please also notice, at the bottom left of the poster, the boxed caption "PARENTAL ADVISORY: Naughty Language" (But probably, it's nothing your kids haven't heard before). 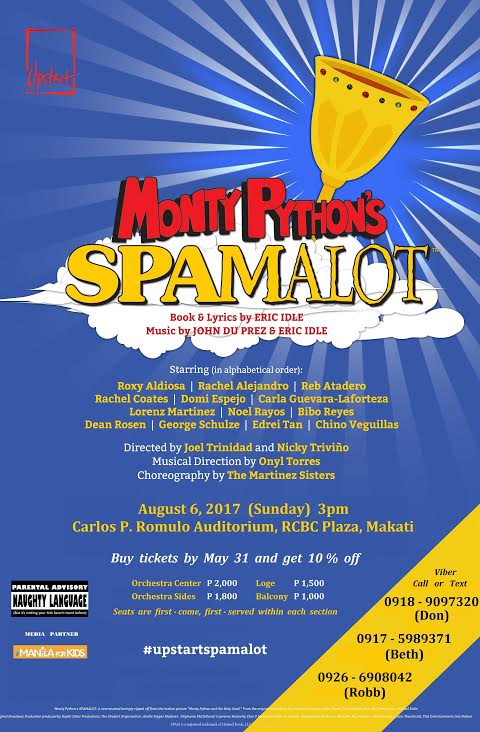 Regular tickets are available through Ticketworld. Balcony: P1,000 Loge: P1,500 Orchestra Side: P1,800 Orchestra Center: P2,000 You've missed the early bird promo and the ManilaForKids promo! But you can still join us on August 6.

We invite everyone to watch Monty Python together with us on August 6. Join us with the whole family, with your eldest only, or just solo! We will be there to laugh with you.  Click here for tickets and to register: JOIN US on AUGUST 6 For all other dates, please reserve your tickets at Ticketworld Hurry! These SPAMALOT tickets are likely to SELL-A-LOT! Monty Python's Spamalot is brought to you by Upstart Productions Inc. and runs in weekends from July 28-August 12, 2017 at the Carlos P. Romulo Auditorium, RCBC Plaza in Makati. Recommended for ages 10 and above.
Klook.com
Klook.com
Klook.com